Yes, I know, I KNOW. I know that today is Halloween. I know it's ridiculously early to be thinking about the holidays. I KNOW.

However, if you're at all like me, and the thought of going to a store after Thanksgiving -- any kind of store at all -- makes you feel like you are about to vomit, then you are probably thinking about getting your holiday shopping started so that you can avoid the madness and bustle and just enjoy the spirit of the season.

Furthermore -- if you, like me, are a book person, you might be known in your family as the person who gives people books. Yes, I am the crazy book-buying Auntie. It's a thing and you know what? I don't even feel bad about it. So there.

Here, then, is my first list of books that are perfectly suited for gift giving. Don't worry -- if you have someone who doesn't fall into any of the below categories, that's okay! There will be a couple more of these. (If you have a specific, hard to buy for person in mind, let me know and I'll find some suggestions for you!)

For the person in your life who loved The Hunger Games:
The Red Queen by Victoria Aveyard

For the person in your life who loves Stephen King and The Dark Tower:
The Fireman by Joe Hill

For the person in your life who is a foodie:
Heat: An Amateur's Adventures as Kitchen Slave, Line Cook, Pasta-Maker, and Apprentice to a Dante-Quoting Butcher in Tuscany by Bill Buford

For the person in your life who loves mysteries:
The Commendant Camille Verhoeven Trilogy by Pierre Lemaitre

For the person in your life who loves Hamilton:
America's First Daughter by Laura Kamoie and Stephanie Dray

The world that Victoria Aveyard depicts is divided into two classes based on the color of their blood: Silvers and Red. Silvers are the ruling class, and have powers -- they control fire, for example, or can bend people to their will. Reds are their frequently mistreated and misused subjects.

The main character, Mare, is a Red, but she is a new kind of Red -- a Red who has the kind of powers only Silvers possess. When those abilities are accidentally revealed before a large gathering of Silvers, they have to act to protect the society that they have so carefully constructed, so they declare her to be a Silver and the future bride of the younger prince.

What happens next is a turn of events that was entirely unexpected and plunges their world into war.

If there is someone in your life who loved The Hunger Games, this book (and its sequel, Glass Sword) will likely please them quite a bit. It's a power struggle with a young woman at the center, and it's creatively and compellingly written. I highly recommend it.

How do I love The Fireman? Let me count the ways. I mean, first, you all know by now that I enjoy a good apocalyptic novel. It's a thing.

I also really love books set in places I know something about, so the fact that this one is set in Portsmouth, New Hampshire -- the very locale from which I am typing this -- makes me extra happy.

Basically, if you're into the notion of a large portion of the population being infected with an illness that causes them to spontaneously combust, watching society collapse and reform, and also getting some really crafty and excellent Dark Tower references (because Joe Hill is Stephen King's son, so why not) OR if you know someone who would dig all of those things? This is a really terrific, well paced read.

In fact, you could say it's so fast, it smokes.

I love Anthony Bourdain, but lately, that guy is EVERYWHERE. He's got books (Kitchen Confidential, Medium Raw,), he's got TV shows, he makes appearances -- he's like Visa. He's everywhere you want to be. Since he's pretty great, that's not a bad thing.

If you have a foodie in your life and you want to surprise her or him with a book about what it's like to cook in a New York hotspot (under Mario Batali, no less), get Bill Buford's novel. Buford is not a chef. He's a guy who loves food and gets sucked into the restaurant world; his prose is amusing, his descriptions vivid, and his determination to figure out restaurant and food culture -- and what makes a celebrity chef, anyway? -- shines through every page. 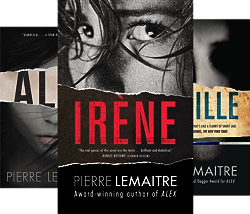 I raved about Pierre Lemaitre's novel Alex a few weeks ago, and it was as I was writing that review that I found it was the middle novel in a three book series. Dan -- being amazingly wonderful -- promptly ordered up the other two books and then I read all three of them in order.

While I do still believe that Alex is the strongest novel in the series (partially because it gets us out of Camille Verhoeven's head more than we are able to do in the other books), the three together are incredibly powerful and heartbreaking; at the same time, though, they are fast paced crime mysteries that keep the reader engaged and interested.

If there is a person in your life who likes murder mysteries, these would make an excellent gift. If buying all three seems excessive, I would suggest either Irene, which is the first of the series, or Alex, which functions beautifully as a stand-alone novel and is the definition of a page-turner.

In addition to being Book People, Dan and I are also Hamilton fans. If you have a Hamilton fan in your life -- and it seems like we all do -- this is a great novel. The main character is Thomas Jefferson's oldest daughter, Martha "Patsy" Jefferson. When her mother dies, she becomes the lady of the house; because of his prominence in American politics, she essentially becomes First Lady during his presidency.

This book is fascinating and -- especially for someone who loves Hamilton -- gives insight (albeit fictional) as to the life and tribulations of one of Alexander Hamilton's political foes. Allowing the story to flow through Patsy enriches the narrative as she also is naturally concerned with not just the direction of the country but also smaller household affairs and the rights of women during that time period.

Let's face it, Hamilton tickets are hard to come by, and you have to give the fan in your life SOMETHING. This would be a good choice.

Well, that's a wrap (get it?) for this gift guide. Again, if I missed the person in YOUR life that you need to buy for, I'll be putting together at least two more of these for you before Thanksgiving, so you can try to avoid the dreaded crowds!