I love a good memoir. I have toyed with the notion of writing one, but I always get started and then decide that my life isn't that interesting, so it would be better if I just, you know, READ another memoir. Or two. Or seventeen.

In honor of Hannah Hart's Buffering which came out TODAY (squeee, I love her so much) I offer up five memoirs that I have found inspiring. (You can expect that I will be reviewing Ms. Hart's book shortly!)

Here's my list of five memoirs that I come back to whenever I need a little inspiration:

Travels with Charley: In Search of America by John Steinbeck

All Rivers Run to the Sea by Elie Weisel

The Death of Santini: The Story of a Father and his Son by Pat Conroy

Hyperbole and a Half: Unfortunate Situations, Flawed Coping Mechanisms, Mayhem, and Other Things That Happened by Allie Brosh

If you looked at my list, saw this title, and groaned as if to say "Seriously, Danielle, could you BE any more basic?" I would like to offer you a story. Once upon a time, I was not the happy book-reviewer that you see before you now. In fact, I was what could only be described as a broken, sad shell of a human being. My marriage had ended horribly, and I had run away to North Carolina and basically become a hermit. I rarely spoke with anyone and only left the house when someone forced the issue. It was during one of these forced field trips that I picked up Eat, Pray, Love -- which I only did because I'd seen Elizabeth Gilbert on a talk show and she had a friendly face, and I felt like maybe I deserved to read something by someone friendly.

That's what Eat, Pray, Love offers. It inspired me to start leaving the house WITHOUT being coerced. It helped me to realize that peace was possible, and that I would find it bit by bit.

I received this book in high school as part of an awards ceremony. My senior year English teacher, Ms Hawkes (shout out to Ms Hawkes!) had picked it out for me. At that point, I had not read any Steinbeck, and I'm honestly not sure how she knew I would love it except for magical English-teacher ESP, which I'm CERTAIN that she (and my other English teachers) all possessed.

Anyway. Back to Steinbeck. In September of 1960 -- long after he'd become JOHN STEINBECK, important author, Mr. Steinbeck decided that he wanted to rediscover America. He wanted to get out there, talk to people, reconnect with the country. So he built a camper, loaded up his poodle Charley (and for some reason, this has always cracked me up ... a POODLE?) and went out on the road. And then, because he was Steinbeck (you know, THE STEINBECK), he wrote about it.

I love this book. I love the language. I love the stories he tells. I even love the poodle. But mostly -- and this is the part I find inspiring -- I love the notion that you're never too old to stop learning and growing. As long as you're drawing breath? You can still discover new things.

In fall of 2009, I went on vacation by myself for the first time ever. There were people in my life who thought that was a completely insane thing to do -- and maybe it was? -- but I had come so far from the broken shell of a girl that I was when I read Eat, Pray, Love and I wanted to go to Boston for a week and walk all over the place and enjoy the autumn and just BREATHE.

This was the only book I brought with me. I spent my days tromping around my beloved city, taking pictures, and my evenings cozied up in my hotel room reading.

If you haven't read Night, Wiesel's account of his experience at Auschwitz, you should. Night is a harrowing tale of survival and courage. All Rivers Run to the Sea is also a tale of survival and courage; it's about finding your place in the world, and believing -- really believing -- that you deserve that spot. It's about struggling with faith and defining what you believe in. It's beautiful and amazing and sad.

This book goes to some dark places, but it is also filled with hope. I think we could use more hope in this world. 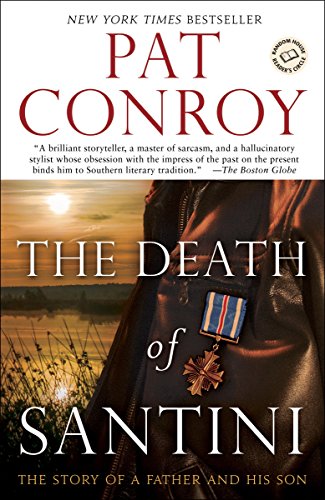 Pat Conroy's novel about his teaching career, The Water is Wide, is excellent and well worth a read; it would have been on this list even a year ago.

But then I read The Death of Santini.

If you're someone who's familiar with Conroy's writing, you know that he tended to write slightly fictionalized versions of things he has been through. Put quite simply, some of those things are terrible.

In this memoir, Conroy details coming to terms with difficult family relationships. While the title specifically mentions his father, Conroy also writes of his mother and her loss, his relationship with his siblings, and how the roles they had played in one another's lives come full circle.

This is a beautiful novel about love, family, and forgiveness. Written in Conroy's lyrical prose, it is a story about the courage it takes to face the past ... and then to let it go and move forward into the future.

I was introduced to Allie Brosh's webcomic, Hyperbole and a Half, when someone sent me this link after I went on a rant about "alot" not being a word. With that, I was hooked. I read through her previous posts, and then followed her.

Until she disappeared from the web.

Allie Brosh, as it turns out, struggles with depression (and I will at some point post about memoirs about depression and mental illness) and as a result, stopped posting. Then she produced one of the most amazing posts about what depression feels like, and what it feels like to fight through it, that I have ever read.

This book is the real deal. It's honest and super funny and ridiculous and raw, and it reminds me that even when things are beyond difficult, you can get through them. Even when you feel like you can't. Even when you sometimes don't want to. You can, and you will, and when you need a laugh? There's always the Alot.

I hope you're able to read some of these and feel inspired! Until next time...